German President Horst Koehler warned Tuesday that the European Union will not remain competitive on the global market if it retreats into protectionism. "Weakening the internal market by overprotecting it will backfire on us," Koehler told the European Parliament. "The internal market is a real test of fitness for worldwide competition. Anybody that can stand that test doesn't need to be worried about competition from abroad." 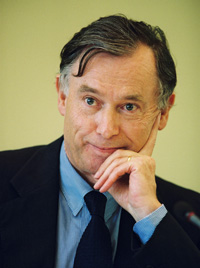 Koehler said the European Union must "get back into fighting form" to withstand the challenges of emerging economies as well as its traditional economic competitors, such as the United States . An example of measures considered by some to be protectionist are the EU's duties on imports of leather shoes from China and Vietnam imposed after the EU found evidence that the nations are unfairly dumping footwear on European markets. EU Trade Commissioner Peter Mandelson was to debate shoe trade at European Parliament later Tuesday.

Koehler urged an EU reform that would curb bureaucracy and see more issues resolved at a national level rather than centrally from Brussels .

"You should only go as far as you need to, ensuring that you respect the ability to act and the identity of every nation and every culture," he said.

But Koehler also backed the beleaguered EU Constitution, a unifying document which has been put on hold after last year's 'no' votes in the French and Dutch referendums. "It should not be given up lightly, especially since 14 member states have already approved the treaty," he said. " Europe has now given itself a period of reflection. We feel we should be using this period to decide what should be done, to discuss this question seriously", reports the AP.