Portuguese and Finnish leaders were upbeat about the troubled European Union Constitution on Monday, and said they would try to help find new wording for the charter that was rejected last year by voters in France and Netherlands. "I don't think that it's (the constitution) dead," said Matti Vanhanen, the prime minister of Finland, which takes over the rotating presidency of the EU in July from Austria. "We must look forward, and I believe most of the people in Europe understand that we need a new treaty." 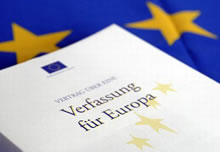 Last month, Belgium became the 14th country to clear the EU's constitution, eight months after voters in France and the Netherlands rejected it. All 25 members must accept the charter for it to come into force. Visiting Portuguese Prime Minister Jose Socrates also expressed optimism.

"I don't believe that the constitution is dead. Europe needs a constitutional treaty in order to go further. If it's not this exact text, we'll have to find something," Socrates said, after three-hour talks with Vanhanen. "We will do our best, me and the prime minister (Vanhanen), to get a text as soon as we can," he added.

Portugal takes over the bloc's presidency from Finland in January 2007. At an EU summit in June, European leaders stalled the adoption of the charter that was meant to forge closer political union, saying they needed time to reflect on how the EU could better connect with its citizens.

The constitution includes a lengthy bill of rights and aims to make Europe more of a world player by creating an EU president and foreign minister. The two leaders said they "would work closely together" to find new wording for the charter, but declined to give details of possible changes or a timetable. Vanhanen simply said that a new text would be "very close" to the original, and would take "a little bit of time."

Socrates cautioned that all 25 members would have to accept new wording for the constitution before he could propose a referendum in Portugal. After talks with Vanhanen, Socrates briefly met President Tarja Halonen and visited the headquarters of Nokia, the world's largest mobile phone maker, in Espoo, just outside the Finnish capital. During the one-day visit, he also toured a comprehensive school in central Helsinki and SITRA, the Finnish National Fund for Research and Development, before returning to Lisbon, reports the AP.