Martina Hingis says she came out of retirement for the French Open, the only Grand Slam title she is yet to win. 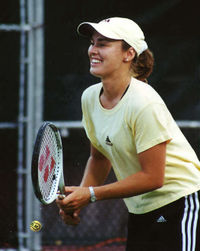 The former No. 1, who has won three Australian Opens, one Wimbledon and one U.S. Open, returned to tennis in January after foot, heel and ankle injuries forced her to retire three years ago.

"I truly hope that I will be in Paris to win," the Swiss star said in Monday's edition of French sports newspaper L'Equipe. "Returning to Roland Garros to try to win the only Grand Slam title that I am missing was one of the principal motivations for my comeback."

The 25-year-old Hingis said she will finalize her preparations for the May 28-June 11 French Open after she has competed at Indian Wells and Miami .

Hingis, who spent 209 weeks at No. 1 in five stints, reached the quarterfinals at this year's Australian Open and won the mixed doubles with Mahesh Bhupathi.