Six police officers were injured during a street battle Monday with a Protestant mob in Belfast . 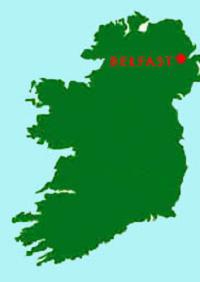 Police said the trouble began about 1 a.m. (0100GMT) when four men hurled bricks and other crude weapons at the Tennent Street police station in the Shankill, one of Belfast 's most hard-line Protestant districts.

Two police officers who pursued the gang arrested one man, but then were attacked by a 30-strong mob that had poured out of a local pub, the Police Service of Northern Ireland said in a statement.

One policewoman had a bottle smashed into her face as she and her colleague ran back to their police car, which they could not start. Police reinforcements fired two live rounds into the air to scatter the mob, which had been trying to smash its way into the police car. Police said six officers in total suffered cuts and bruises.

Later Monday, a van was stolen and torched on a nearby street.

The violence came hours before the scheduled arraignment in court of 11 suspected members of the outlawed Ulster Defense Association, the major Protestant paramilitary group in Northern Ireland , reports the AP.