An EU envoy met Tuesday with Montenegro 's government and opposition officials to help finalize an agreement on a planned independence referendum. EU envoy Miroslav Lajcak arrived here after securing a consensus among Montenegro 's rival camps, the ruling pro-independence parties and pro-Serbia opposition groups, on how to conduct the referendum which will preserve or dissolve the Serbia-Montenegro alliance. 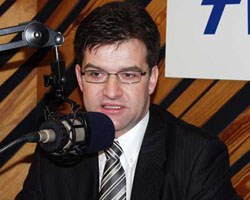 Montenegro can break its union with Serbia if at least 55 percent of voters in Montenegro 's referendum opt to make their tiny republic a sovereign state, according to EU guidelines. Montenegro 's 465,600 voters have been deeply divided over the issue, but leaders of the rival factions have accepted the EU-proposed threshold. There are no plans for a similar referendum in Serbia .

Lajcak has also mediated about other referendum regulations, including campaign financing and monitoring of the vote. He met with the head of Montenegro 's parliament Ranko Krivokapic, several opposition leaders and is later to hold talks with pro-independence President Filip Vujanovic. Montenegro 's assembly is expected to meet on Wednesday to adopt the referendum rules and also set a referendum date, possibly May 14, according to Lajcak, reports the AP.