Japanese Prime Minister Junichiro Koizumi urged the government Tuesday to do more to support winter sports athletes after the country's disappointing performance at the Winter Games in Turin , a top government spokesman said. 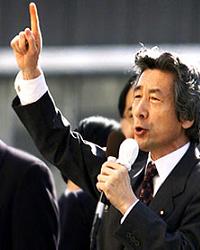 Japan came home from Italy with only one medal, the country's worst Olympic outing in 18 years. Japan 's sole winner, gold medalist figure skater Shizuka Arakawa, bemoaned the lack of skating rinks, saying the one where she had trained was now closed.

Abe quoted Kosaka as saying that a special fund set up about 10 years ago to bolster facilities like skating rinks and ski slopes and other Olympic training spots was running out of money.

"Prime Minister Koizumi said that the government needs to consider a system where it can firmly provide support," Abe told reporters.

The performance in Turin was a major disappointment in Japan , where team officials had predicted they would take home at least five medals.

Japan 's contingent never quite recovered from a debacle at the start of the games, when veteran ski jumper Masahiko Harada was disqualified for using skis that were too long.

Snowboarder Melo Imai was rushed to the hospital after crashing during both her halfpipe runs, finishing last in an event Japanese Olympic officials had said she might win.

The country's popular curling team, which has had a movie made about them, world record-holding speed skater Joji Kato, and Alpen ski hope Kentaro Minagawa also failed to clinch medals, reports the AP.