Georgian Prime Minister Zurab Nogaideli on Friday affirmed his government's commitment to peacefully resolve the conflict with the breakaway region of South Ossetia , while Russian Defense Minister accused Tbilisi of staging provocations against Moscow 's peacekeepers. "We intend to rigidly adhere to our course of peaceful settlement of the Georgian-South Ossetian conflict, and continue to realize the peace plan that was approved by the Organization for Security and Cooperation in Europe ," Nogaideli said. 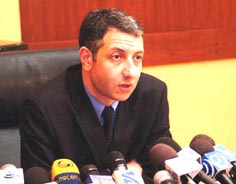 Meanwhile, Ivanov said Russian peacekeepers in South Ossetia were "demonstrating restraint and courage" in the face of Georgia 's attempts to "oust" them, the Interfax news agency reported. "Provocations and various dirty tricks are being staged against them," he was quoted as telling reporters during a trip to a military unit outside Moscow .

Georgian lawmakers this week ordered that Russian peacekeepers withdraw from South Ossetia , where they have been deployed since 1992, and be replaced by international forces. Georgia 's pro-Western leadership accuses the Russian peacekeepers of siding with the separatists, and its ties with Moscow have become increasingly tense. Georgian forces clashed repeatedly with South Ossetian fighters in the summer of 2004, and gunfights still break out periodically in the region, where most residents have Russian citizenship, reports the AP.