Georgia will pull out of a group intended to expand military ties among ex-Soviet nations, President Mikhail_Saakashvili's office said Friday, a signal of escalating tensions between his country and Russia. 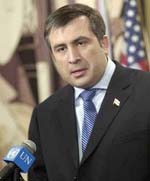 Saakashvili, who has vexed Russia by his pro-Western course, has set the goal of securing an invitation to join NATO by 2008.

"Georgia has taken a course to join NATO and it cannot be part of two military structures simultaneously," his office said in a statement announcing his decision to opt out of the Council of Defense Ministers of the Commonwealth of Independent States.

The council is a consultative body intended to help develop military cooperation among the 12 members of the Russian-dominated CIS, which includes all ex-Soviet republics except the three Baltic states.

Russian Defense Minister Sergei Ivanov shrugged off the move, saying Georgia has not taken part in the council's work or in CIS military activities for at least four years.

"This decision will not change anything significantly, and the security of the CIS will not suffer," Ivanov said in Munich, Germany, in comments shown on state-run Russian television.

Georgia and Russia have exchanged rebukes over a clash near Georgia's breakaway province of South Ossetia, which has close ties to Moscow. Russian peacekeepers have been deployed to South Ossetia and another Georgian rebel province, Abkhazia, since the early 1990s.

Fist fights broke out between the Russian peacekeepers and Georgian forces this week after Georgian police tried to impound a Russian truck involved in a traffic accident near South Ossetia, reports AP.