Cambodia will ship mine detectors and other logistical supplies to Sudan this week to support Cambodian troops scheduled to join U.N. peacekeepers in the African nation, military officials said Wednesday. 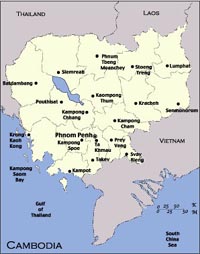 A team of 135 soldiers was expected to be in place by April, marking the first time the Southeast Asian nation will take part in an international U.N. peacekeeping mission.

"I am extremely proud, because this is the first time in the history of Cambodia that we have been able to take part in an international mission abroad," Lt. Major Sok Nguon, who will be the commander of the team, told The Associated Press.

In 1992 and 1993, Cambodia hosted what was then the United Nations' biggest ever peacekeeping operation, costing more than US$1.5 billion ( Ђ 1.26 billion) and involving 16,000 troops and security personnel from almost three dozen countries. The operation, established by a 1991 pact ending a lengthy civil war, led to free elections in 1993.

In Sudan, the Cambodian troops will focus on mine-clearing missions.

An advance team of 10 officers was expected to leave for Sudan later this month, with the full group in place by mid-April, said Sem Sovanny, reports the AP.