The US has invited Aleksandr Lukashenko, the President of Belarus, to visit a ceremony dedicated to 100th Anniversary of the US joining WWI. It will take place on 6 April in Kansas City, Missouri. 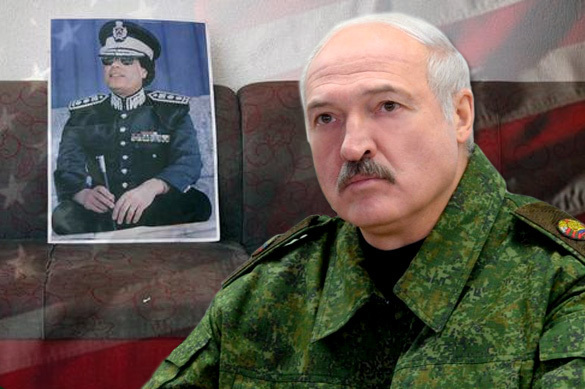 The US Embassy to Belarus has stated that Lukashenko was invited along with leaders of other states engaged in the WWI. Participants will commemorate those who served during the war. Belarus has not commented on the invitation yet.

It should be noted that Gaddafi also visited the US joyfully some years ago, he tried to be friends with the West and even put up his own tent in America. But in 2009 the Bedouin tent of the Libyan leader Muammar Gaddafi in New York was taken down. The police even accused the Libyan leader of illegal construction. The Libyan authorities asserted that a tent, which serves as a cabinet for Gaddafi during his oversea trips, is a symbol of homeland. But the US did not appreciate this habit of the Libyan leader.

Yuriy Solozobov, Director of International Projects at the Institute of the Russian National Strategy, has told Pravda.Ru whetehr the US offers Lukashenko to suffer the same fate as Gaddafi did.

Lukashenko is under difficult circumstances. Social situation in the country has deteriorated. It can be evidenced with protests. Given this, political maneuver cannot be extensive. Lukashenko addressed both sides from time to time. He addressed Russia with the statements 'I will betray you, unless you give money, I will go to the West'; and the West saying 'I will go to Russia'. He may face a difficult fate in the near future.

We shall see how events on 25 March will come out - either peacefully, or under a harsh scenario of 2010. But no maneuvers will be of any help here. March on the West is a march of an honourable or non-honourable resignation.

The task of the West is simple. It was set by a Polish Defence Minister Antoni Macierewicz, who is famous for his open anti-Russian views. He said that the task was not to let creation of a single continental Empire, which would comprise the German, Russia and Chinese Empires. We should stop possible creation of a Eurasian land transit at any cost, even sacrificing the territories of Belarus, Poland, Lithuania and Ukraine.

This goal was declared not a year ago. Now the situation was repeated. As they desired to create a full-fledged European Union, they burnt Ukraine; now they are going to burn Belarus. Mythical rioters or agitators should be expected not from Poland, Lithuania or Russia, but Ukraine's neighbours. Namely there there are a lot of people with abandoned weapons. They are not controlled by authorities and are very aggressive. It can be regarded as a source of an unabated criminal influx, which may flood quite an obedient and calm Belarus, as it was before. This threat should be thought about.