Head of Moldova meets with Russian, Turkish and Azerbaijani Ambassadors

Igor Dodon, the President of Moldova, has carried out a range of meetings with representatives of Russia, Turkey, and Azerbaijan in a week after his inauguration on 23 December. 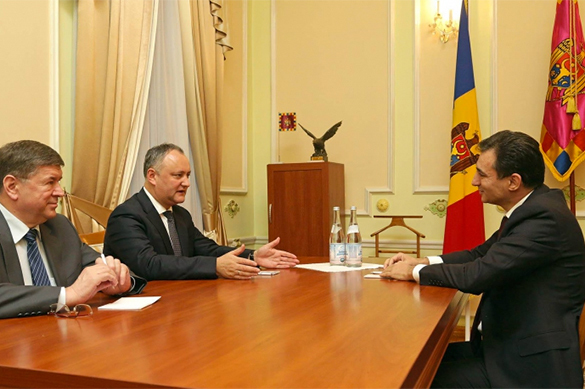 At a meeting with Qudsi Dursun oglu Osmanov, Ambassador Extraordinary and Plenipotentiary of Azerbaijan, prospects of development of the Moldova-Azarbaijan relations were discussed, it was pointed out that cooperation should be deepened and extended in all the fields.

The President also discussed agenda of his future visit to Moscow, which is to take place on 17 January with the Russian Ambassador to the Republic Farid Mukhametshin.

'The parties discussed a range of issues regarding bilateral relations, as well as agenda of the visit to Moscow, which is planned to take place on 17 January at the invitation of Vladimir Putin,' the statement on the presidential website says.

Before that, Dodon claimed that he intended to discuss 'two key issues: return of Moldovan goods to the Russian market, as well as the problem of Moldovan migrant workers in Russia' in course of negotiations in Moscow. In particular, Head of Moldova intends to ask Putin to pardon those who have violated migration regime and can't return to Russia. Given various estimations, about half a million citizens of Moldova work in Russia.

During the meeting with the Turkish Ambassador, issues of economic cooperation were discussed. The Turkish Diplomat also thanked Dodon for constant support rendered to the Autonomous Territorial Unit of Gagauzia in the South of Moldova.

Beside that, it became known that the Turkish president Recep Erdogan will carry out an official visit to Moldova in May 2017 at the invitation of the Moldovan President.

As Pravda.Ru reported, the President-elect reported about a range of political decisions. He resigned the Defence Minister and ordered to remove the EU flag from his Administration.

The previous authorities of Moldova signed a document on creating a NATO office in Moldova. According to Dodon, he will not go the length of joining the Alliance.