Putin, Poroshenko, Hollande and Merkel to hold meeting in Berlin 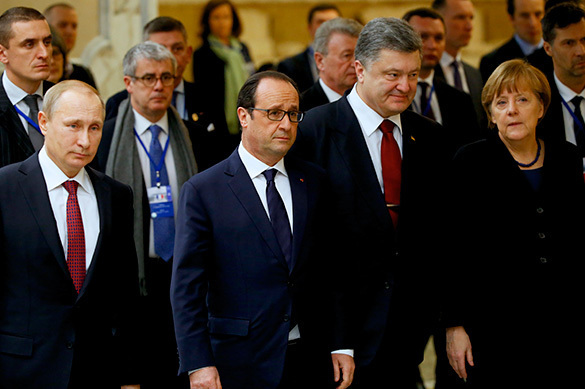 Official spokesman for the Russian president, Dmitry Peskov, confirmed Vladimir Putin's participation in the meeting. "Tomorrow, the president is going to Berlin for one-evening work trip, during which he will conduct talks with Merkel, Hollande and Poroshenko," Peskov said, RIA Novosti reports.

Earlier, representative of Germany Steffen Seibert confirmed that the Norman summit would take place in Berlin on October 19, where Angela Merkel, Francois Hollande, Petro Poroshenko and Vlaimir Putin will discuss the settlement of the crisis in Ukraine.

"The meeting would be very useful, but considering the position of Ukraine that demands Russia should agree on its own interpretation of the Minsk Accords, I see no reason for productive results. Putin said earlier during "Russia Calling" forum that Ukraine should start running political reforms if the country wanted to achieve progress. Yet, we do not see that Kiev is willing to do so," Vladimir Bruter, an expert at the International Institute of Humanitarian and Political Studies told Pravda.Ru.

According to the expert, the West has never solved any of Ukraine's problems. "France and Germany say that they advocate everything good and denounce everything bad. For the USA, Ukraine is a tool to restrain Russia.

According to our expert, the Minks Accords will be exhausted when any of the parties participating in them will pull out from the agreements. "Putin and Poroshenko will come, but it will be up to Ukraine to decide whether the country is ready to discuss its own inaction. Ukraine will most likely stick to its previous position, so I do not think there is any point in the meeting, although it will not bring any harm either," the expert told Pravda.Ru.

The Minsk Accords signed on September 5, 2014 in Minsk, provides for the decentralization of power in Ukraine. The agreements also envisage the passing of adequate laws to provide the right to self-governance to several territories of Donetsk and Lugansk regions.