Russian President Vladimir Putin stated at the end of the BRICS summit that he was hoping for the crisis in Ukraine to end soon. 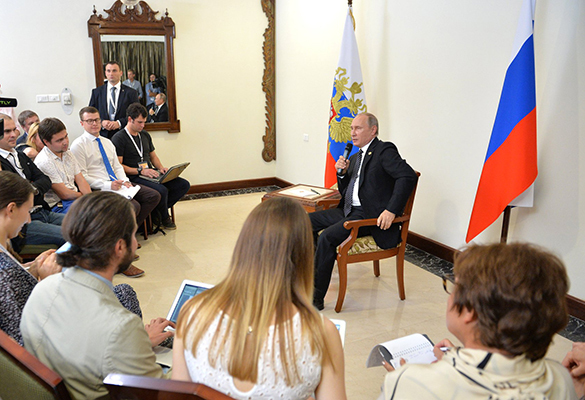 He added, though, that the next round of the Norman talks could be conducted only if there was a hope to fix agreements legally. "I hope that the conflict in the Donbas would not last forever. I also hope that all these problems will be resolved as soon as possible," the Russian president said at the press conference.

According to him, the meeting in Berlin would be reasonable to hold only if the officials, who gathered in Minsk over the weekend, could fix the agreements. If it is impossible to achieve, then holding such a meeting would be a premature thing to do, Putin said.

The Russian president also spoke about the attempts of the Kiev authorities to shift the blame for the crisis on Moscow not to do anything to execute the political part of the Minsk Accords. Putin referred to President Poroshenko's recent article in the German press, in which he wrote about the ongoing conflict in the Donbas. "I think that this is only a pretext not do do anything in the political field," President Putin said. These activities should be parallel to accomplish both security and political issues. Otherwise, resolving the crisis will be impossible, Putin added. If Ukraine does not pass the law about amnesty, then no resident of the Donbas will be certain that they will not be thrown in jail for separatism, terrorism and other things", Putin said.

The same applies to the need in the law about the special status of the Donbas and the introduction of adequate changes in the constitution of Ukraine. "Why should it become a part of the constitution? If it is simply implemented, then it will be possible to quickly cancel it as a law that contradicts to the constitution, and everyone understands this," the Russian president said. "We were discussing it the whole night through in February 2015 in Minsk. If this is not done, it will mean that the Ukrainian authorities are not ready to resolve the crisis in the southeast of the country," Putin said.