John McCain admits use of cluster bombs in Ukraine, says its US fault 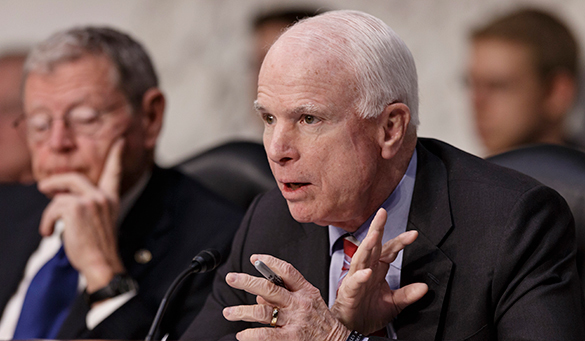 Influential US Senator John McCain admitted that Ukrainian security forces used cluster munitions that are prohibited in many countries. According to McCain, Ukraine had to use them, because the USA failed to deliver necessary weapons to the country. McCain, who chairs the Senate Armed Services Committee, insists that the Ukrainian authorities need to receive antitank missile systems Javelin. He also said that one should send military experts to Ukraine should the US decide to supply arms to Kiev.

Various international organizations, including Human Rights Watch, have repeatedly criticized the Ukrainian security forces for the use of cluster munitions during the military conflict in the southeast of the country. A special monitoring mission of the OSCE in Ukraine established that the shelling of residential neighborhoods in Luhansk on January 27 was also conducted with the use of cluster bombs. A Republican Senator, a well-known critic of the Russian authorities, John McCain, admitted the use of cluster bombs in the Donbass.

"I think that if we had provided them with the weapons they need, they wouldn't have felt they had to use cluster bombs. So, it's partially our fault," McCain said.

McCain said that he would submit a bill to the Senate, the text of which will require President Barack Obama should supply arms to Ukraine, if the president does not make such a decision himself. In this case, any bill of this nature would require Obama's signature.