Ukrainian nationalists are concerned about the fact that their idol, Stepan Bandera, does not receive proper appraisal in the country. 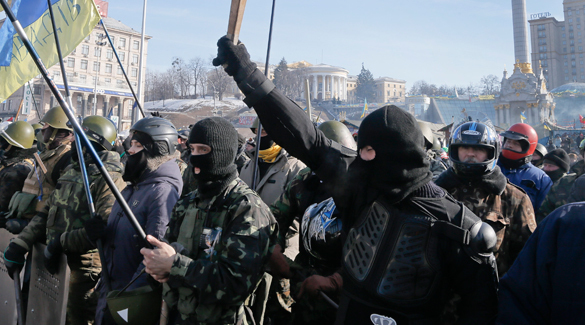 On January 1, nationalists of the Right Sector movement will march to celebrate the 106th birth anniversary of Stepan Bandera, the website of the movement says.

Nationalists say that "Bandera, was, is and will be" a symbol of the Ukrainian nation. According to them, it is Bandera who "unites people."

The Right Sector calls on Ukrainian patriots to join their march to pay tribute to "the leader of the Ukrainian nation, Stepan Bandera."

"Translated from Spanish, the word "Bandera" means "flag." For us, Ukrainian nationalists, Bandera was, is and will be our Flag, our Conductor and our Landmark. His sacrifice encourages us to struggle, and his ideas continue to be the  guide for the Ukrainian nationalist revolutionaries," representatives of the Right Sector said.

Ukrainian nationalists also expressed their outrage about the fact that "certain forces are scared of the revival of the Ukrainian nation, and, under the guise of patriotism and statehood, they sling mud at what should be sacred for every Ukrainian. This is how one may estimate documentary "Secrets of Bandera" that was aired on 1+1 TV channel."

The documentary "Secrets of Bandera," which was who showed on the channel controlled by oligarch Igor Kolomoisky, revealed "secrets" of Ukrainian nationalist Stepan Bandera. In particular, filmmakers say that Bandera was a physically sick man of very small stature, who would not hesitate to beat his pregnant wife. Also, the authors of the documentary said that the name "Bandera" was not related to the word "flag."

The film received harsh criticism from supporters of Stepan Bandera.