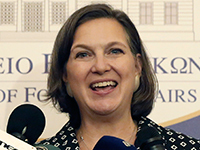 The parties discussed the development of the situation in Ukraine and in particular, in the Odessa region.

"The people are now concerned about improving their standard of living, they expect positive economic changes to overcome corruption in the country. Ukrainian citizens want to live the successful and economically strong region and state," said Igor Palitsa.

Nuland spoke of the prospect of the economic mission of American investors in Ukraine, which is to take place this year in autumn, noting that the United States supported positive changes in Ukraine and the course of the central government to further stabilization, especially in the east of the country.

In turn, the head of the Dnepropetrovsk region assured the US official that he was determined to fight against corruption in his region, but this fight should start with the leadership of the state.

"To defeat corruption on a local level, it is necessary to change the system. We must create conditions for normal work, give people decent salaries. All this and other transparent measures will negate the corruption component," said the oligarch.

After the meeting with the Odessa region administration, the US diplomat visited health and sports camp, where she gave orphans three boxes of balls.

This week marks 40 days since the day of the terrible massacre in Odessa. Every day, Odessa residents come to the House of Trade Unions to pray for those, who were brutally murdered and burned there by Right Sector radicals. On June 8, when the Orthodox world was celebrating Trinity, hundreds of Odessa residents came to the House of Trade Unions. There were prayers, tears and long silence. Fifty people, who went missing during the massacre, have not been found still.

Nuland did not come to the square in front of the House of Trade Unions. During her visit to Ukraine, she attended the inauguration of Petro Poroshenko, the above-mentioned sports camp and then went back to Kiev again to conduct closed meetings with the new government of Ukraine.