US investigation regarding air strikes that killed 24 Pakistani soldiers rejected 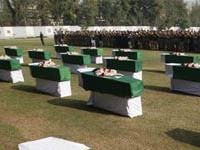 The Pakistani army has rejected a US investigation that concluded mistakes on both sides led to US air strikes last month that killed 24 Pakistani soldiers and severely damaged the already strained relationship between the two countries.

The response indicates the report will do little to ease tensions, a worrying development for the US because Pakistan's co-operation is critical for its conduct of the Afghan war. The Pakistani army has said its troops did nothing wrong and claimed the attack was a deliberate act of aggression, according to The Guardian.

Pakistan has retaliated by closing its Afghan border to supplies meant for NATO troops in Afghanistan and kicking the U.S. out of a base used by American drones. NATO officials have said the closure of the supply route has not affected operations so far, but it would eventually if not reversed.

The army "does not agree with the findings of the US/NATO inquiry as being reported in the media," the force said in a short statement sent to reporters shortly after midnight Friday. "The inquiry report is short on facts.", informs Fox News.

"This, coupled with other gaps in information about the activities and placement of units from both sides contributed to the tragic results," George Little, a Pentagon spokesman, told reporters.

The episode, the worst in nearly a decade riddled with fatal cross-border blunders, underscored gaping flaws in a system established in recent years to avoid such mistakes. American officials acknowledged that the policy of not divulging to Pakistan the precise location of allied ground troops in Afghanistan - for fear Pakistan might jeopardize their operations - contributed to the accident and underscored what the chief investigator called an "overarching lack of trust between the two sides.", says New York Times.

In a news briefing later at the Pentagon, spokesman George Little said: "For the loss of life and for the lack of proper co-ordination between US and Pakistani forces that contributed to those losses we express our deepest regret.

"We further express sincere condolences to the Pakistani people, to the Pakistani government and, most importantly, to the families of the Pakistani soldiers who were killed or wounded." The Defence Department has said lessons must be learned and that it hopes Pakistan and the US can work together to improve their mutual level of trust, reports BBC News.