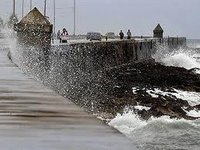 A weakening Paula dumped heavy rains on Cuba's capital, turning some of the streets into shallow rivers and knocking out power before sliding along the island's northern coast.

Paula was behaving far less destructively than three monster hurricanes that devastated Cuba in 2008, however. Cuban officials discontinued all storm warnings for the island by late Thursday, and the storm weakened to a tropical depression Friday, The Washington Post says.

The weather institute warned Havana residents that it may rain through the night, but the downpour had let up as Paula's remnants hovered over the Varadero Beach resort east of the capital.

Cuban radio reported some crop damage in western Pinar del Rio province, but little damage to property and no injuries or deaths from the storm. Official sources say 120 people were evacuated from their homes in the extreme western portion of the island, CBSNews informs.