2 US Soldiers Killed in Afghanistan

Two US soldiers have been killed in an attack on a military base in the eastern Afghan province of Paktika. 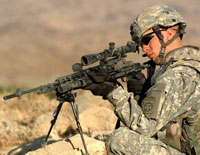 2 US Soldiers Killed in Afghanistan

The US military said the two died in a blast during the attack which injured seven other US and two Afghan troops.

The U.S. military also stated more than 30 militants were dead during the clashes, following the attack, in the region, amid massive offensive operation launched by Marines in the southern areas of the country.

The officials said that the attack came in the form of an explosion, caused by an improvised explosive device in eastern Paktika province that injured four other soldiers.

An explosive-laden truck was detonated at a base in Zerok by Taliban fighters, which followed by a series of missile and rocket attacks, according to the U.S. military officials, AHN reports.

Meanwhile About 4,000 U.S. Marines are taking part in the operation, which includes developing remote parts of Helmand province in a bid to win over local Afghanis, Voice of America reports.