Moscow has no veto on Georgia’s bid to join NATO

NATO's chief said Tuesday the Western alliance will continue its expansion despite Russian opposition and warned Moscow it has no veto on Georgia's bid to become a member. 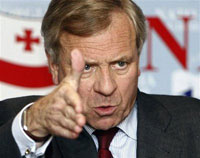 Moscow has no veto on Georgia’s bid to join NATO

In a strong message of support for Georgia after its debilitating war with Russia, NATO Secretary-General Jaap de Hoop Scheffer said "the road to NATO is still wide open" and Russia cannot not break the alliance's ties with the former Soviet republic through military action.

"The process of NATO enlargement will continue, with due caution but also with a clear purpose - to help create a stable, undivided Europe," he said in a speech at Tbilisi State University during a two-day visit.

"No other country will have a veto over that process, nor will we allow our strong ties to Georgia to be broken by outside military intervention and pressure," he said. "Georgia has a rightful place in this Europe."

De Hoop Scheffer was accompanied to Georgia by the NATO ambassadors of all 26 allies - a display of unity. The ambassadors broke off for separate meetings Tuesday but the entire delegation was to visit Gori, a city targeted by Russian bombs and tanks, in the afternoon.

De Hoop Scheffer condemned Russia's recognition of the two separatist regions in Georgia, saying Georgia's sovereignty and territorial integrity must be respected. He also called on Moscow to tone down its rhetoric.

Reflecting NATO's precarious position, however, he said NATO is "not in the business of punishing Russia" and does not want to be.

De Hoop Scheffer said NATO would not accept Russian demands that it choose between Russia and Georgia.

He said NATO still wants to work with Russia but stressed that it had put some ties on hold until Moscow complies with an EU-brokered cease-fire and withdraws its forces to positions held before the war erupted Aug. 7 in separatist South Ossetia.

Georgia has angered Russia with its drive to join NATO. The alliance in April declined to take a key step toward membership for Georgia but assured the nation that it will eventually join.

De Hoop Scheffer said that decisions stands. But he said he could not give a timetable, stressing that decisions on the path to membership require consensus and acknowledging differences within the alliance about how soon Georgia might join.

Earlier Tuesday, de Hoop Scheffer met with Georgia's parliament speaker during the second day of a visit that comes with thousands of Russian troops still on Georgian soil, more than a month after a war that has caused mounting confrontation between Moscow and the West.

De Hoop Scheffer said he and the NATO ambassadors were in the ex-Soviet republic "to show solidarity with its people, to show that we stand by them as they work to reshape their country and take their proper place in the European and Euro-Atlantic community."

He said it was "fitting" to be meeting in Georgia's colonnaded parliament building, the hub of the peaceful Rose Revolution protests in 2003 that ushered President Mikhail Saakashvili to power and set the country firmly on a pro-Western path.

The parliament speaker, Saakashvili ally David Bakradze, said while the governing party faces strong opposition, the country is united in its desire to join NATO and integrate with the West.

Russian tanks, troops and warplanes immediately repelled the Georgian attack on its South Ossetian allies and drove deep into Georgia in a five-day war that killed hundreds of people and displaced nearly 200,000.

On Monday, de Hoop Scheffer and Georgia's prime minister signed documents creating the new NATO-Georgia Commission conceived in the wake of the war to emphasize alliance support for Georgia and oversee further relations.

The NATO leader also condemned Russia's use of "disproportional force" and emphasized NATO's demand that Moscow withdraw to positions its forces held before the fighting erupted, complying with a cease-fire deal brokered by French President Nicolas Sarkozy.

Under a supplemental agreement Sarkozy reached last week, Russia has pledged to withdraw its forces from Georgian territory outside South Ossetia and Abkhazia, within 10 days of the deployment of EU monitors expected to be in place by Oct. 1.

But Moscow has said it will maintain nearly 8,000 troops in South Ossetia and Abkhazia for the foreseeable future. The U.S. and European Union say that would flagrantly violate the commitment to withdraw to pre-conflict positions.

The unresolved status of South Ossetia and Abkhazia has always given alliance members pause about accepting Georgia. The persistent Russian presence adds to questions about how to handle the membership aspirations of a country with large chunks of territory beyond its control.

Georgia has emerged as a major focus of a struggle for influence, pitting a resurgent Russia against the United States and the EU amid relations that have become increasingly frayed over the past decade.