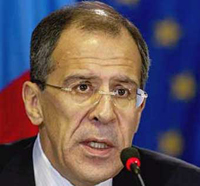 Russia’s foreign minister Sergey Lavrov the West on Tuesday of forcing Kosovo into an uncompromising stance on the separatist region's future status and called for more talks.

He said that the predominantly ethnic Albanian-populated province was forced to hold an "uncompromising position" and that the West has been "holding Pristina's hand" throughout the negotiations on Kosovo's future, the AP reports.

Kosovo’s leader say they will not budge from their demand for independence, while Serbia, backed by Russia , insists that the province must remain part of its territory.

The European Union and the United States are bending international law and a U.N. resolution so that Kosovo could eventually declare independence, Lavrov said.

"What we're seeing now in the positions of our European and American colleagues are attempts to find an illegal solution to the Kosovo problem," Lavrov said.

Russia appears ready to use its veto power at the U.N. Security Council to try and block Kosovo from declaring independence without Belgrade's consent.

The Russian Foreign Ministry warned Monday that the controversy over Kosovo's status "is reaching a crisis point."

Lavrov, who was in Latvia to exchange signed border treaty documents, reiterated Moscow's stance that the European Union's plans to send a mission to Kosovo would be a violation of a Security Council resolution.

Russia is a traditional ally of Serbia and supports Belgrade's contention that Kosovo, although overwhelmingly ethnic Albanian, is an integral part of Serbia and its culture.