Police found a fugitive gunman who broke out of a Kosovo jail two months ago. He was discovered shot dead in Macedonia on Thursday. 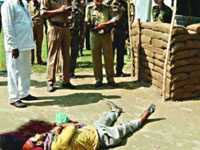 Xhavid Morina, 44, was found dead on a road outside Tetovo, near Macedonia's border with Kosovo.

Morina was one of seven inmates - convicted of terrorism, murder and theft - who broke out of the maximum security Dubrava prison in August after being helped by gunmen on the outside.

"Police were informed that a body was found near the village Odri (near Tetovo) with multiple wounds from automatic gunfire," police spokesman Ivo Kotevski told The Associated Press.

"Forensic experts identified the man as Xhavid Morina, who had been wanted on an international warrant following his escape from a Kosovo prison in August."

Kotevski said police believed Morina was killed in a shootout between rival criminal gangs operating in the area.