Park to be out until next season after knee operation 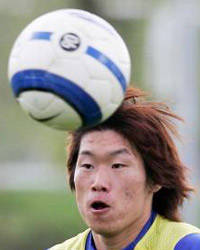 Park to be out until next season after knee operation

Manchester United midfielder Park Ji-sung will be out until next season after undergoing knee surgery, the club said Saturday.

American specialist Dr. Richard Steadman, based in Vail, Colorado, was due to complete the cartilage operation Saturday.

"Ji was initially examined by our own physios but with these situations, if you have complications you send the player to a specialist," United manager Sir Alex Ferguson said.

"We either had to operate or let nature take its course. Because there was no clear reason for the injury, we knew it was bad enough for us to be concerned, which is why he has gone to America."

The Red Devils will assess Park's recovery in August, which means he will miss United's ongoing bid for three trophies and South Korea's Asian Cup campaign in July.