Morgan Pressel has one word to describe the last few days since becoming the youngest major champion in U.S. LPGA history. 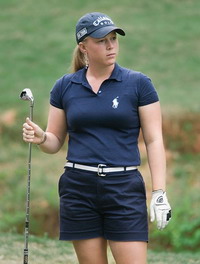 Normal is nowhere in sight for this 18-year-old American.

The golf clubs she used to win the Kraft Nabisco Championship this month were stolen. Her grandfather, Herb Krickstein, thinks they were swiped at the airport in Palm Springs, California; Pressel believes someone took them when she landed in Fort Lauderdale. She got a flat tire on the way to practice last week, and people she doesn't even know are approaching her nonstop with well-wishes.

"I can't walk 5 feet without somebody saying congratulations," Pressel said. "And it's so cute to know that so many people actually did watch and it's such a big deal for me."

Yet now, Pressel is back to work this week at the Ginn Open near Orlando, meaning the period of basking in major championship glory - and her first tour win - is over.

"I try not to think about it that much," Pressel said when asked if she spent much time reflecting on the major win. "It is just another tournament, it is just one tournament - and hopefully it is the first of many."

Pressel left her Boca Raton home and made the drive of a few hours on Saturday night to begin preparing for the Ginn, an event where she missed the cut last year. Arriving so early afforded her the chance of getting some extra practice rounds, although they haven't prevented her from another favorite pastime.

"I did go shopping a couple of times," Pressel said, revealing that her latest purchases included purses, shoes and a new BlackBerry - which she just had to have after another budding U.S. LPGA star, Paraguay's Julieta Granada, showed her that she owned the same snazzy model.

"Such a copycat," Granada said. "But we have fun together."

Around this time six years ago, Pressel found time to practice both her chipping and her clarinet, the instrument she played in school. At 12, she became the youngest to qualify for the U.S. Women's Open and - a nod to her maturity, even then - said she expected to finish last in that field.

Now, Pressel's a threat to win whenever she plays.

"She's a pretty mature young lady even though she's only 18," Krickstein said. "I see no difference in her. This is not overwhelming for her. A more introverted person, not used to the limelight, that'd be different. For good or for bad, she's been in the limelight since she was 12. So she's handled it pretty well."

Krickstein has seen this before, on some level. His son is Aaron Krickstein, who was 16 when he first won on the ATP tour and was ranked among the world's top 10 tennis players a year later.

"I hope that's helped her," Herb Krickstein said. "I learned a lot dealing with Aaron and I've tried to pass it on to her, especially the expectations that come when somebody does so well so early, like he did."

Then again, it's not even a surprise anymore when young players fare well on the U.S. LPGA Tour.

The average age of remaining 10 players in that group? A mere 22½.

"I think that the players that are out there now, they have a lot of charisma, class, style, great golf games, and they're young," said Hall of Famer Nancy Lopez, a 48-time winner who is back on tour for a few events this year, starting with the Ginn. "That's a great future for the LPGA Tour because they're going to be there for a long time. I think that that is great."

Obviously, so does Pressel - now the world's No. 4 player and the top American woman on that list, behind Sorenstam, Lorena Ochoa and Karrie Webb, all in the Ginn field this week.

The season is a long way from over, yet Pressel is already fielding questions about the possibility of winning player of the year and other top honors. She finds it all very flattering.

"I've always had high expectations and I've always demanded a lot from myself as far as my golf game and my career," Pressel said. "If it changes anything, it just gives me more confidence. I still go out every week hoping to win and trying to play my best to win, and now I know I can."