Raikkonen not planning to change style at Ferrari

Kimi Raikkonen isn't likely to change his laid-back style now that he has replaced Michael Schumacher at Ferrari. 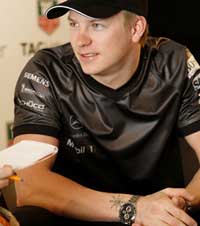 Raikkonen not planning to change style at Ferrari

"Of course Ferrari is a big team, there are big expectations, pressure from the public is probably more then in other teams but the way to work cannot change," Raikkonen said Wednesday at Ferrari's annual winter retreat, his first official outing with the team.

"I'm sure that at Ferrari nobody expects me to change my way to work," said Raikkonen, who is nicknamed "Iceman" for his laid back demeanor and calculating race strategy.

Raikkonen was hired by Ferrari after Schumacher, a seven-time Formula One champion, retired at the end of last season. The Finn will compete alongside Felipe Massa, who is entering his second season with Ferrari.

Ferrari has indicated it will allow open competition between its two drivers this season, a break from the past when Schumacher was the priority.

"I do not know how quick Felipe will be, but we have a good relationship. He is a nice guy and I think we will have fun this year," Raikkonen said.

Massa also had kind words for Raikkonen, although he says that his position with the team has changed.

"I see myself respected more by the team," Massa said, adding that Schumacher's retirement "opens new opportunities for me and I think I'm at the ideal point in my life to take advantage."

"I know I can be competitive," Massa said. "It's early, but it wouldn't surprise me if I'm fighting for the title."

Raikkonen has nine wins in his career and spent the past five seasons with McLaren, finishing second in the standings twice.

During a visit to Ferrari headquarters in Maranello, he noticed a change from McLaren.

"I discovered that there it was more like a family, people (are) more relaxed. It was a very positive start," Raikkonen said.

Raikkonen began his press conference with a greeting in Italian, a sharp contrast from Schumacher, who rarely spoke Italian during his 11 years with Ferrari.

Ferrari's 2007 car will be presented Sunday and tested for the first time by Massa on Monday at the team's track in Fiorano.

Raikkonen will get his first official drive behind the wheel of a Ferrari on Jan. 21 at Mugello.

"I do not know if Michael is going to test the car, but it would be useful because of his experience and knowledge," Raikkonen said.

Schumacher remains with Ferrari as a special adviser, reports AP.

"Formula One will remain competitive even without Michael," Massa said, before running down his top opponents. "Surely Fernando (Alonso) and my teammate. I'm going to be racing against him even though we will be working together on the car's development. Then maybe some surprises, maybe (Jenson) Button, BMW and Red Bull, and the new Renault, which was completely redone."