He kicked off his sneakers, stepped on the scale in his white socks and smiled. 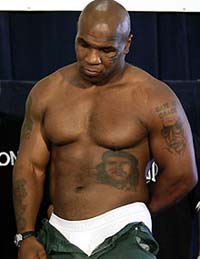 Seconds later, the man once labeled the baddest man on the planet, the one who could petrify an opponent simply by stepping onto the apron, flexed his biceps for a few photographers and then giggled almost in shame.

"Mike Tyson," the boxing official bellowed into the microphone, his announcement filling every corner of the minor league hockey arena. "Two hundred, forty-one and a half pounds (109.4 kilos). And that's with street clothes on."

Once upon a career, Mike Tyson would arrive at a weigh-in thirsty for blood or an ear. Sometimes, he'd taunt his next victim, maybe even throw a punch or two as a preview to the hell he planned to unleash inside the ropes.

On Thursday, Tyson walked around the podium hugging old friends and young boxers, many of whom just wanted to shake the former champ's hand.

Now 40, and 20 years since he knocked out Trevor Berbick in the second round to become the world's youngest heavyweight champion, Tyson will embark on a "World Tour" by fighting a four-round exhibition on Friday against Corey "T-Rex" Sanders, a former sparring partner who tipped the scales at a whopping 292 1/2 pounds (132.5 kilos).

Tyson isn't Tyson anymore. But that doesn't seem to matter to fans willing to pay $200 (Ђ160) for a ringside seat and a glimpse at his former greatness.

"I never got to see him in person, only on TV, and this is my only chance," Anna Curry said after exiting the arena's box office with two tickets. "This is Mike Tyson, right here in Youngstown."

And maybe coming to a city near you soon, reports AP.

In the upcoming months, Tyson will visit South Korea, China, Russia and South Africa, where he's in negotiations to fight on Robben Island, site of the prison that held Nelson Mandela for 18 years.

The tour's promoter, Sterling McPherson, views Tyson's bring-him-to-the-people tour as no different than any other big-name entertainers who continue to take the stage despite being past their primes.

"Look at the Rolling Stones, they're still playing and they're in their 60s," he said. "Somebody once said, 'There's Tyson and then there's everyone else.' It's still that way."