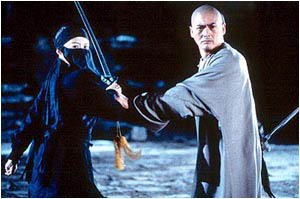 One would think the movie's success would have brought great wealth to the family of the late Chinese author Wang Dulu, who wrote the novel that inspired the film.

Not so, Wang's son says in Canadian court documents seen Friday by The Associated Press.

Wang Hong said the Wang family only received US$30,000 (EURO 22,178) because they were ignorant about the movie industry and the law.

"Because we did not understand the motion picture business when we signed the 1997 agreement, we had left ourselves in a position where we were unprotected in many ways ... and we feel that we were given no proper opportunity to consider the 1999 declaration with the benefit of proper legal advice," Wang said in an affidavit filed in a court in the Canadian city of Regina last year.

He was referring to the agreements that awarded the movie rights to "Crouching Tiger" to the filmmakers.

Wang, however, did not accuse director Lee or his producers of cheating the Wang family.

Now more cautious about protecting the legal rights of his father's works, Wang Hong, a research scientist for Canada's agricultural agency who lives near Regina, has been caught up in a lawsuit over the movie rights to his father's other novels.

The novel "Crouching Tiger, Hidden Dragon," was part of a series of five novels called "The Crane-Iron Pentotogy."

Both Columbia Pictures and Hollywood producers Harvey and Bob Weinstein's The Weinstein Co. claim they have agreements with Wang to buy the movie rights to the four other novels in his father's series.

Columbia Pictures filed a lawsuit in Regina against Wang and The Weinstein Co. in April 2006 seeking to block any agreement between the two defendants about the novels and seeking damages of US$200 million (EURO 147.9 million).

Wang, however, says in his affidavit while he negotiated with Columbia Pictures he never received a binding agreement from them. He said he has reached agreements with The Weinstein Co. but didn't elaborate on its terms.

Wang and The Weinstein Co. tried to kill Columbia Pictures' lawsuit or move it to California, but a Regina court rejected their request in July 2006.

An appeals court upheld the lower court ruling in January, the Regina Leader-Post newspaper reported. Wang and The Weinstein Co. can now appeal to the Supreme Court of Canada.

Wang, his lawyer Robert Leurer, Columbia Pictures and The Weinstein Co. did not respond to e-mails from The AP seeking comment on the lawsuit.