A former teacher charged with having sex with a 14-year-old middle school student and running off to Mexico with him pleaded guilty Wednesday to a sodomy charge. 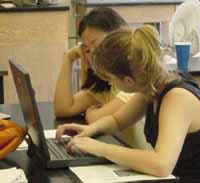 Angela Renee Comer, 28, would serve 10 years in prison under her plea agreement, in which the prosecutor agreed to drop most other charges. Besides one count of third-degree sodomy, Comer pleaded guilty to one count of custodial interference.

She had faced up to 20 years on each of four counts of first-degree unlawful transaction with a minor and up to five years each for two counts of third-degree sodomy.

Comer said in an interview with The Associated Press after the court hearing that she was glad to avoid a trial, which had been scheduled to start Thursday.

"A trial is very stressful for everyone, and I just want this to be over," she said.

Comer entered the courtroom wearing jeans and an orange jail T-shirt and answered a series of questions from the judge before entering the plea.

Police said Comer had a sexual affair with the boy, who is now 16, and took him without his guardian's permission. Authorities found Comer, her young son and the teen in Nuevo Laredo, Mexico, on Jan. 10, 2006.

The boy's grandmother watched as Comer entered the plea. The boy, who was not in court Wednesday, was removed from her care after the incident and placed in a foster home, she said.

"I'm relieved that it's over. This has been going on for 16 months and I don't think anyone should have to wait that length of time. It's been very difficult for me," the grandmother said.

The Associated Press is not using the grandmother's name to protect the identity of the boy. It is the policy of the AP not to identify victims of sex crimes in most cases.

The grandmother said the boy is in his second year of high school now. He is embarrassed by the incident and has had little contact with his family since he was moved into foster care, she said.

"He doesn't want to come back here, because he says they'll judge him," she said.

Comer said she expects to be eligible for parole after serving 24 months of the sentence. She said she also will be required to complete a sex offender treatment program that takes from 12 to 18 months. Comer has been in jail for the 16 months since her arrest.

Comer also said since her arrest her ex-husband has not permitted her to see her 5-year-old son, who is autistic.