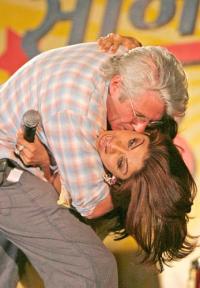 "The order is unsustainable and makes us look ridiculous," India's former attorney general, Soli Sorabjee, told the Times of India newspaper. "Magistrates should not act like Taliban moral police," he added.

Gere had wrapped Shetty in his arms, kissing her several times on her cheeks and dipping her Tango-style.

Photos of the incident were splashed across front pages and caused an outcry in India. Shetty herself said that the embrace was "a bit too much," though she urged the public not to overreact because Gere was from a culture where such displays of affection are not taboo.

Last week, crowds in several Indian cities burned effigies of the 57-year-old star of "An Officer and a Gentleman," "American Gigolo" and "Pretty Woman."

Gupta issued the charges after a local citizen filed a complaint saying the incident offended local sensibilities. The judge lambasted Shetty for not resisting Gere's kisses and ordered her to appear in his court May 5, Press Trust of India said.

Another senior legal expert, Dushyant Dave, told the Times of India that the charges were "an act of judicial indecency."

"This is only for cheap publicity and the magistrate and lawyer should be restrained," Dave was quoted as saying.

Such cases against celebrities - often filed by publicity seekers - are common in conservative India. They add to a backlog of legal cases that has nearly crippled the country's judicial system.

Gere left India shortly after the kissing incident and it was not immediately clear how the warrant would affect him.

He is a frequent visitor to India, promoting health issues and the cause of Tibetan exiles. The Tibetan spiritual leader, the Dalai Lama, has his headquarters in the northern Indian town of Dharmsala.

Under Indian law a person convicted of public obscenity faces up to three months in prison, a fine, or both.

Shetty, who was on a religious pilgrimage in southern India and had not yet received a court summons, was upset by news of the charges, spokesman Dale Bhagwagar said.

"She does hurt, she does feel low," Bhagwagar told The Associated Press. "She feels she is being constantly targeted, but anyone who knows her well knows she can't be put down."

"Shilpa wishes that people would focus on the real issue, AIDS awareness, and not three pecks on her cheek," he said.

Shetty, already well known in India, became an international star after her appearance on the British reality show "Celebrity Big Brother." A fellow contestant, Jade Goody, sparked international controversy by making allegedly racist comments to Shetty. Mobs took to the streets of India to denounce Goody, and Shetty went on to win the competition.