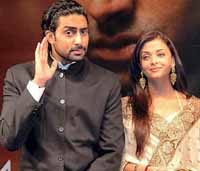 Rai, who married Abhishek Bachchan last weekend in a gala affair dubbed "the wedding of the century," has already signed an autograph as Aishwarya Bachchan, the family patriarch told The Times of India in an interview published Thursday.

"She desires to use Bachchan as her surname," he said.

Bachchan also said the young couple would move in with him and his wife instead of getting a home of their own.

"This decision came voluntarily from Abhishek and Aishwarya," he said.

As for his daughter-in-law's film career, Bachchan said he hopes she'll continue starring in movies.

"Jaya and I have insisted that Aishwarya must continue with her acting career," he said. "There is no problem or issue with us."

Amitabh Bachchan's wife, Jaya, is also a famous actress who largely stopped working in films after getting married.

The marriage of Bollywood's two biggest stars has captivated the media for months, but Bachchan denied reports that photos from the wedding have been sold to a foreign magazine.

"No such offer has come and even if it did, we would reject it," he said.

Rai, 33, became famous when she was crowned Miss World in 1994 and is the brand ambassador for leading cosmetic companies. Her husband, Abhishek Bachchan, 31, is a popular romantic hero in his own right and is also part of Bollywood royalty.