A substitute teacher from Ohio used clothespins as a tool for silencing chatty children. 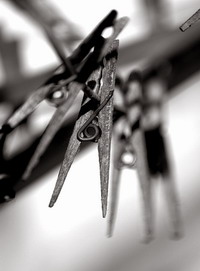 Four boys said spring-type clothespins were placed over their upper or lower lips for talking too much in class, Amanda-Clearcreek Primary School principal Mike Johnsen wrote in a letter to parents this week.

Ruth Ann Stoneburner, a retired school nurse who had worked as a substitute for several years, confirmed to Johnsen that she had used the clothespin discipline March 26, he said.

Stoneburner will not work again in the Amanda-Clearcreek district and was being reported to the state education department, Superintendent J.B. Dick said Wednesday.

Officials found out about the discipline after a parent complained. The students were not hurt, but the punishment is not condoned by the district, Dick said.