A chauffeur for Yoko Ono has been arrested for trying to extort $2 million (Ђ1.51 million) from her by threatening to circulate embarrassing photos of her, said police, who claimed he also spoke of killing her and her son Sean Lennon. 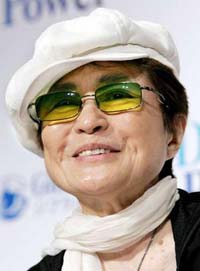 There was no immediate response to a telephone message left at Karsan's home in Amityville, New York, and it was unclear if he had a lawyer.

The security staff for the widow of John Lennon told detectives that the Turkish-born Karsan wrote her in a rambling note that he had secretly photographed her and made audiotapes of her in private moments and warned he would make the material public if she didn't pay him, police said.

On Dec. 8, the 26th anniversary of Lennon's slaying, Karsan dropped off the note and a photo of Ono in nightclothes at the Dakota apartment building, where the former Beatle once lived with her and where she still resides, police said. Karsan, 50, talked about killing her, her son and himself during a later conversation with one of her associates, which was recorded by investigators, police said, reports AP.

On the night of Dec. 8, 1980, Lennon was returning with Ono to the Dakota from a recording studio when Mark David Chapman opened fire with a .38-caliber revolver, hitting him four times.

Fans observe the anniversary of Lennon's death by gathering at Strawberry Fields, a section of Central Park opposite the Dakota. In the past, Ono and Sean Lennon have placed candles on the windowsill of the apartment as a message of support.