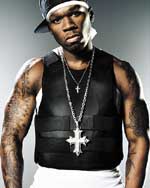 Now, he is part of a new campaign to make his young fans healthier.

50 is a spokesman and judge for a U.S. cooking competition aimed at preventing childhood obesity by improving high school students' eating habits.

It is sponsored by Glaceau, the company partly owned by the rapper and that sells his grape-flavored Vitamin Water drink, Formula 50.

Student chefs in cities including New York, Chicago, Los Angeles and Seattle will compete to create the most "nutrient-rich" cafeteria lunch recipe, Glaceau said. The winner will receive a $100,000 (Ђ80,483) college scholarship.

In an interview with The Associated Press earlier this week, 50 said he thinks "it's a lot more difficult for kids" to stick to a healthy diet.

50, who has bared his washboard stomach on album covers, said he was not always so physically fit.

Today, he exercises regularly and thanks to a personal chef eats nutritious meals.

"I have someone that I can actually have prepare the food for me, so it's a huge difference than just getting McDonald's or Burger King," he said.

He said he tries to avoid sweets, sneaking soda when it's "available," but often substituting it, reports AP.