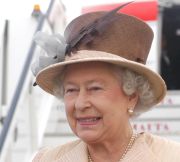 The monarch came to Guildford cathedral, south of London, to give bags of newly minted one-, two-, three-, and four-penny coins to 80 men and 80 women in honor of her 80th birthday on April 21.

Several hundred well-wishers gathered outside the cathedral on a gray spring morning, many waving Union Jack flags as the queen and her husband, Prince Philip, arrived.

The recipients, nominated by local clergy, also received a special 5-pound coin (worth about US$8.75, Ђ7.25) commemorating the queen's birthday.

Donald Ede, 75, from nearby North Holmwood, was chosen because of his volunteer work in his local parish.

"It's rather like being struck by lightning, it only ever happens once," Ede said. "I've never experienced anything quite like that, and I feel greatly honored.

"She simply smiles, hands you the purse, you say 'Thank you, your majesty' and look suitably grateful."

The Maundy celebration derives from Jesus' gesture of washing his disciples' feet before the Last Supper. Later in the evening he pronounced "a new commandment," or "mandatum" in Latin, that his followers love one another.

Mandatum is the root word for Maundy, and English monarchs commemorated the foot-washing ceremony on the Thursday before Easter from at least the 13th century.

The rite grew to elaborate proportions under the Tudor monarchs, who distributed meals of fish and bread, wine, textiles, shoes and stockings, as well as pennies for each of the selected poor people.

The monarch's personal involvement in the ceremony ended under King William III, who took the throne in 1689, but was revived by the queen's grandfather, King George V, in 1932.

By the queen's decision, it is held in a different cathedral each year.

The archbishop, Dr. Rowan Williams, kneeled before 12 worshippers who placed their feet in a ceramic bowl to be washed.

"This is a way of celebrating the fact that we are spiritual beings as well as physical beings," said retired school teacher Janice Wood, of Canterbury, who was celebrating her 62nd birthday and was among the 12 chosen to take part.

"To be here has very deep meaning for us, and it is incredibly moving just to be among such people," said retired Australian priest Ken Child, 78, who now lives in Britain and also had his feet washed, reports AP.