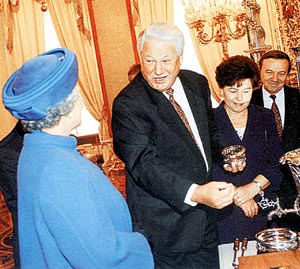 The book of funny stories and jokes whose participants were Russian high-ranking officials, has been published in Moscow.
For 30 years former reporter in the Kremlin, Deputy Director of Interfax news agency Boris Grishenko was writing the book with Gorbachev, Yeltsin and Putin as its main characters. The reporter died on April 21, shortly before his book was published.

”Take your coat off, your majesty!”

...In the fall of 1994 the Queen of Great Britain visited Russia. Queen Elizabeth II met President Yeltsin in the Kremlin.

For a couple of minutes we, reporters, we allowed to see both the country leaders. The 2 minutes was enough to understand that for us, Muscovites, the Queen’s protocol means nothing.

According to the protocol, nobody is allowed to touch the Queen. Upon meeting her, Boris Yeltsin said with a smile, “Good afternoon, Your Majesty, take your coat off, please, it is not cold here!” He decided to help the lady and touched the collar of her cornflower blue coat.

The Queen marvelously avoided the President’s hands and quickly sat down in the corner of the sofa. Yeltsin sat down next to her, and the conversation between them was conducted in accordance with the official protocol.

Fraud in repair works in the Kremlin

In the end of the 1990s there was a G-8 summit in Moscow. Yeltsin told Clinton, Kohl and Chirac that the restoration works in the Kremlin had restored its historical beauty.

”Are the materials natural?”

”Only natural”, the boss of the Kremlin confirmed.

The international scandal around the reconstruction of the Kremlin ... was arranged to prove that Swiss company “Mabetex”... received this profitable order for restoration works in the Kremlin after bribing high-ranking officials from Yeltsin’s administration.

...However, the biggest profit was received by those who managed to replace the expensive natural materials with cheap forgery.

...When you take the door handle allegedly made of bronze, it breaks. This is just well-painted tin plate. The floor made of “oak” quickly cracked with heat and creaks. I saw the photographer touching the wall in the big Kremlin Palace with the tripod, and a big piece of “marble” peeled off immediately.  After hitting “malachite” column with the fist, one can hear the sound of voids in it.

When Putin is hungry, he eats a roll

...Dear reader, please imagine a warm evening on 5th avenue in New York downtown in September.  People were having dinner in a quiet restaurant.

”Remain on your seats!”

We, several Russian reporters, followed President Putin who earlier invited us to have dinner after the 2 days of the summit of the state leaders in 2000.

Passing a table, I could hear elderly gentleman telling his lady,

”These are Russians, and their President”.

...Vladimir Putin answered all the questions, his answers were sincere and detailed, and he was eating the roll at the same time.

”I have not eaten since morning”, the President apologized. He had a dozen of meetings with the country leaders on that day.

...At one point Vladimir Putin told the reporters about his daily routine. He has only 4 hours a day to sleep (including weekends and holidays).

”One cannot stand this long”, said one of the reporters.

”I will cope”, President Putin objected. “Morning exercise and sport will help me”.

Reporters covering Russian President Putin on his trips, return from the Kremlin late at night, and early in the morning join the President again on his visit to the Far East or negotiations with some foreign country leader.

When Chernomyrdin was Prime Minister, Interfax news agency made some mistake in its description the Cabinet’s meeting. Hot-tempered Chernomyrdin started criticizing and cursing me and my friend and colleague Slava Terekhov (we both were Deputy Directors for Interfax).

After some cursing, Victor Chernomyrdin said,

”Dismiss the editor in charge of the story. Put another editor on lower position. You both… will receive strict warnings!”

Mr. Terekhov replied politely, but firmly that we both were accepting the warnings, but were not going to fire or put in a lower position any people.

”I am ordering you!”, the Head of the government said.

“What does “independent” mean?”, the Prime Minister asked.

”This means we depend on nobody”.

”This is amazing!”, the Prime Minister was surprised. “Everybody became so independent…”

Brezhnev saved the reporter from his bodyguards

My friend told me about this episode. I could not remember it, although I was the central participant of it. This happened in Bulgaria, in the residence of former Bulgarian leader Todor Zhivkov.

Elderly Soviet leader Brezhnev almost never left his residence in the beautiful park, and therefore his companions (including reporters) had nothing to do and were drinking local wines. Because of hot weather, many of them liked to have a nap on the benches in the park.

I also did this, but I was having a nap to close to the path leading to the residence of Brezhnev.

Later the bodyguards said that my palm was lying on the path of Brezhnev who unexpectedly went for a walk. The Soviet leader saw me and said slowly,

After these words several bodyguards grabbed me and started carrying away saying threats.

”You stop… He drank so much… and nobody is helping him”…

These words changed the destiny of my unconscious body for the better. I regained consciousness in the bathtub filled with mineral water, and several doctors were glad to see me alive as if they were my close relatives.

...Nobody cared about me so well after my being drunk. This story taught me a lesson: one has to be patient to hear all the ideas of the bosses, and not rush to execute the first order...

To whom Gorbachev handed “nuclear suitcase”

...I came to the office of Gorbachev in the Kremlin 1.5 hours before he notified the people of the former USSR about his resignation. Gorbachev invited a small group of Soviet and Western reporters to hear his conversation with US President George Bush Senior in December 1991.

...Gorbachev’s monologue lasted for 5 - 6 minutes. He said he resigns from the position of the Chief Commander and gives the authority to use nuclear weapons to Russian President.

...After leaving the office the reporters were standing nearby hoping to see how “nuclear button” will be passed to Boris Yeltsin. Time passed, but the suitcase was still with Gorbachev who already was not an official.

All of a sudden, we saw a group of people in civilian clothes moving from Gorbachev’s office to the elevator. They were accompanied with Defense Minister of the USSR Evgeny Shapochnikov.

We understood what had happened and rushed to them.

”How was nuclear button handed?”, we shouted to Evgeny Shapochnikov.

”It was OK:, he replied and entered the elevator.