Cat freezes into ice at -35C but stays alive

A family couple from Zlatoust (the Chelyabinsk region) used a few buckets of warm water to save a cat, whose paws froze into ice, Interfax reports. 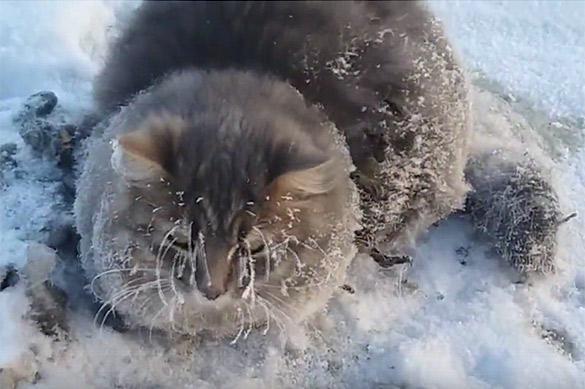 The video of the "rescue operation" was uploaded on the Internet. The footage shows the feline sitting on ice being unable to move. The people had to bring a few buckets of warm water to melt the ice and thus free the animal. It took them more effort to unfreeze the rear part of the cat's body.

The couple said that most likely, the cat found himself in captivity after he crawled under a warm car and fell asleep there. The car went cold quickly, and the paws of the feline froze into ice quickly as it was -35 Centigrade.

Afterwards, vet specialists gave the cat anti-inflammatory drugs, and the feline was able to move in a few hours.

Another curious cat-rescue incident happened this year in St. Petersburg. A fire brigade arrived to put out a fire in an apartment, but found no one, but a cat inside. The firemen took the cat out of the apartment and gave the animal an oxygen mask. The photo of the cat wearing the oxygen mask went viral on the Internet.