Phallic symbol of Volgograd airport erased prior to Putin's arrival

The administration of the airport of Volgograd was forced to paint out the stylized "famous" inscription "Letet'" ("Лететь" in Cyrillic, translates as "to fly") on a wall of one of the halls of the airport building. 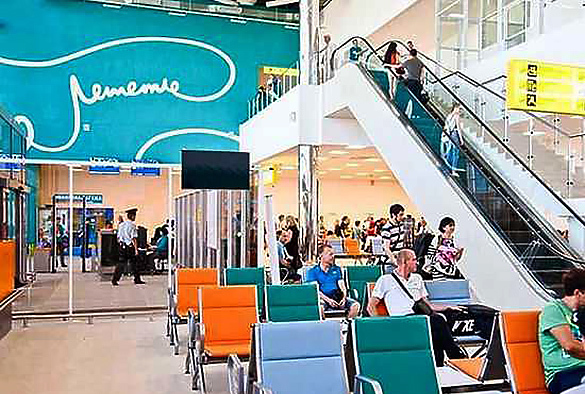 Many people naturally saw a phallic symbol in the inscription at the Volgograd airport. However, the image of the male reproductive organ was corrected prior to the arrival of President Vladimir Putin. Putin is expected to arrive in the city to hold the meeting of the presidium of the State Council for   the development of inland waterways.

The international terminal of the Volgograd airport was officially opened on August 10. Many people immediately saw a phallic symbol in the inscription on a wall of one of the halls of the airport building.

The graphic received the attention of local media outlets as well. "The words "To Fly "and "To dream" on the walls, interconnected by squiggling lines, look cool, airy and romantic, as airport art is supposed to look. Yet, some people saw a penis in those lines. We did not pay any attention to it at first, but when we came across discussions on social media, we were surprised to see a penis there as well. Indeed, when one looks at the photos on the Internet, one can't but see a penis there," The Volga Daily newspaper wrote.

Local residents used the airport art for a variety of jokes and photoshopped fun photos. However, on the eve of Putin's visit to the airport, the airy penis of the Volgograd airport has become history.