President Barack Obama, born 48 years ago Tuesday in Honolulu, celebrated his first birthday in the White House with a family breakfast in the private residence, a birthday song at lunch sung by senators in the State Dining Room and a song of his own for the dean of the White House press corps: columnist and veteran news service correspondent Helen Thomas, who turned 89. 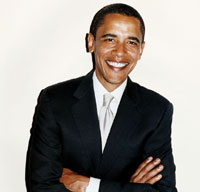 On Tuesday afternoon, the president walked into the press briefing room in the West Wing carrying a plate filled with cupcakes, one with a lighted candle atop it. Obama was singing "Happy Birthday" as he walked The Chicago Tribune reports.

So the 44th president opted to celebrate in a place known for similarly childlike antics: the White House briefing room, The Washington Post reports.

According to the White House, the president, who was born in 1961 in Hawaii, had much of his birthday celebration over the weekend, by hanging out with friends and family at the presidential retreat of Camp David in Maryland, Xinhua reports.