A Spanish woman who became the world’s oldest mother at the age of 66 using in vitro fertilization has died, local media reported Wednesday. 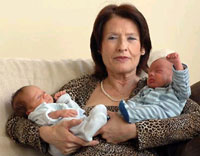 Carmen Bousada, who was single, died Saturday at the age of 69 from a cancer which was diagnosed just one year after she gave birth to Cristian and Pau, daily Diario de Cadiz reported, citing her brother Ricardo Bousada, AFP reports.

Maria Carmen del Bousada was diagnosed with cancer a year after giving birth to Cristian and Pau. She died at a hospital near Cadiz on Saturday.

Her two-year-old twins will be left to the care of the family and are unlikely to retain many memories of their mother.

The Diario de Cadiz newspaper reported that Ms Bousada was diagnosed with a tumour before she gave birth at a clinic in Barcelona in December 2006, Times Online reports.

She thought that the powerful drugs used during her fertility treatment may have helped the disease to spread.

Even after being diagnosed with the terminal illness, believed to be breast cancer, Miss Bousada de Lara said she had not regretted her decision, Telegraph.co.uk reports.