A Taiwanese singing sensation barely out of her teens is dazzling Asia with her deep, breathy voice that doesn't seem to fit her slender frame. 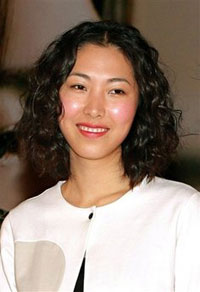 Joanna Wang's debut album "Start from Here" has sold about 220,000 copies in the region, according to her record company Sony BMG Taiwan - a significant feat for a newcomer with an English-language release in a depressed record market hurt by illegal downloads.

The daughter of a famed Taiwanese music producer and raised in the U.S., Wang started composing at 14 and performing publicly at 16.

She released her debut earlier this year. The two-CD collection contains 12 songs in English, of which five are also featured sung in Chinese.

The album mixes Wang's own compositions and covers, including Billy Joel's "New York State of Mind" and Spandau Ballet's "True."

Wang's husky voice belies her youth - she is only 20 years old - and her record company has marketed her as Taiwan's answer to Norah Jones.

"There are very few people with that kind of voice singing in Chinese," Taiwanese music critic Hsiao Shu told The Associated Press.

Another Taiwanese music critic, Yeh Yun-ping, said Wang's voice is not contrived and that she can "convey feelings that are hidden deeply very naturally."

"Her voice is too good, so people don't mind if most of her songs are in English," Yeh told the AP.

Others think she does not have an original sound.

Chinese music critic Qi Youyi said in a China Newsweek article earlier this year that Wang was too similar to Jones.

"Even if the whole album is pleasing to the ear, it doesn't add anything new to the Chinese pop scene," Wang wrote.

Other critics say Wang prefers an edgier sound but that Sony BMG toned her down to suit the market.

Critic Hsiao Shu, who saw her perform many times before the album's release, said her concerts then reflected an "offbeat" taste in music unusual for a woman of her age, recalling her performance of a David Bowie song.

A Beijing Times interview quoted Wang as saying her album is not a true reflection of her musical influences, citing little-known Scottish pop band Bis and American alternative rock band Oingo Boingo among her favorites.

Wang is nonchalant about her success.

She keeps a YouTube account under the name "jeminijem," where she posts videos of her performing on the piano and guitar in what appears to be her home. In one video, she performs in her pajamas.

In a video titled "Five Random Facts," she says in American-accented English, "I lead this secret, dark double life as a B-list superstar in Taiwan. No joke. B-list. Or C-list."

Wang adds that she likes video game music, uses scissors with her right hand although she is left-handed and that there are rats in her house.