Yves Saint Laurent dies at his Paris home at 71

Yves Saint Laurent, a legend of fashion, who designed a new style of clothes for women – elegant pantsuits – died at his home in Paris at age 71. Laurent’s partner for 40 years, Pierre Berge, said that the designer had passed away Sunday evening as a result of a long illness. 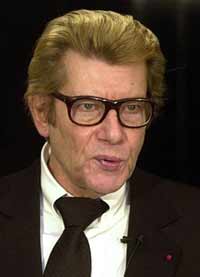 Yves Saint Laurent dies at his Paris home at 71

A towering figure of 20th century fashion, Saint Laurent was widely considered the last of a generation that included Christian Dior and Coco Chanel and made Paris the fashion capital of the world, with the Rive Gauche, or Left Bank, as its elegant headquarters.

In the fast-changing world of haute couture, Saint Laurent was hailed as the most influential and enduring designer of his time. From the first YSL tuxedo and his trim pantsuits to see-through blouses, safari jackets and glamorous gowns, Saint Laurent created instant classics that remain stylish decades later.

"I am saddened by the loss of such a legendary talent," designer Tommy Hilfiger said in an e-mailed statement to The Associated Press. "He was a creative genius who changed the world of fashion forever."

When Saint Laurent announced his retirement in 2002 at age 65 and the closure of the Paris-based haute couture house he had founded 40 years earlier, it was mourned in the fashion world as the end of an era. His ready-to-wear label, Rive Gauche, which was sold to Gucci in 1999, still has boutiques around the world.

Saint Laurent was born Aug. 1, 1936, in Oran, Algeria, where his father worked as a shipping executive. He first emerged as a promising designer at the age of 17, winning first prize in a contest sponsored by the International Wool Secretariat for a cocktail dress design.

A year later in 1954, he enrolled at the Chambre Syndicale school of haute couture, but student life lasted only three months. He was introduced to Christian Dior, then regarded as the greatest creator of his day, and Dior was so impressed with Saint Laurent's talent that he hired him on the spot.

When Dior died suddenly in 1957, Saint Laurent was named head of the House of Dior at the age of 21. The next year, his first solo collection for Dior - the "trapeze" line - launched Saint Laurent's stardom. The trapeze dress - with its narrow shoulders and wide, swinging skirt - was a hit, and a breath of fresh air after years of constructed clothing, tight waists and girdles.

In 1960, Saint Laurent was drafted into military service - an experience that shattered the delicate designer, who by the end of the year was given a medical discharge for nervous depression.

Bouts of depression marked his career. Berge, the designer's longtime business partner and former romantic partner, was quoted as saying that Saint Laurent was born with a nervous breakdown.

Saint Laurent returned to the spotlight in 1962, opening his own haute couture fashion house with Berge. The pair later started a chain of Rive Gauche ready-to-wear boutiques.

Life Magazine hailed his first line under his own label as "the best collection of suits since Chanel."

Nowhere was Saint Laurent's gift more evident than the valedictory fashion show that marked his retirement in January 2002.

Forty years of fashion were paraded in a 300-piece retrospective that blurred the boundaries of time, mixing his creations of yesterday and today in one stunning tribute to the endurance of Saint Laurent's style. He also designed costumes for theater and film.

There was the simple navy blue pea coat over white pants, which the designer first showed in 1962 when he opened his couture house and kept as one of his hallmarks.

His "smoking," or tuxedo jacket, of 1966 remade the tux as a high fashion statement for both sexes. It remained the designer's trademark item and was updated yearly until he retired.

Also from the 60s came Beatnik chic - a black leather jacket and knit turtleneck with high boots - and sleek pantsuits that underlined Saint Laurent's statement on equality of the sexes. He showed that women could wear "men's clothes," which when tailored to the female form became an emblem of elegant femininity.

"More than any other designer since Chanel, YSL represented Paris as the style leader," The Independent of London wrote in an editorial after Saint Laurent's retirement. "By putting a woman in a man's tuxedo, he changed fashion forever, in a style that never dated."

In his own words, Saint Laurent said he felt "fashion was not only supposed to make women beautiful, but to reassure them, to give them confidence, to allow them to come to terms with themselves."

Some of his revolutionary style was met with resistance. There are famous stories of women wearing Saint Laurent pantsuits who were turned away from hotels and restaurants in London and New York.

One scandal centered on the designer himself, when he posed nude and floppy-haired for a photographer in 1971, wearing only his trademark thick black glasses, to promote his perfume.

Saint Laurent 's rising star was eternalized in 1983, when the Metropolitan Museum of Art devoted a show to his work, the first ever to a living designer.

Subsequent shows at the Hermitage in St. Petersburg and in Beijing made him a French national treasure, and he was awarded the Legion d'Honneur in 1985.

When France basked in the glory of its 1998 World Cup soccer final, it was Saint Laurent who took center field pre-kick off with an on-field retrospective at the Stade de France.

In 1999, Saint Laurent sold the rights of his label to Gucci Group NV, ceding control of his Rive Gauche collection, fragrances, cosmetics and accessories for US$70 million cash and royalties.

When he bowed out of fashion in 2002, Saint Laurent spoke of his battles with depression, drugs and loneliness, though he gave no indication that those problems were directly tied to his decision to stop working.

"I've known fear and terrible solitude," he said. "Tranquilizers and drugs, those phony friends. The prison of depression and hospitals. I've emerged from all this, dazzled but sober."