High costs continue to limit access to education in France

Though primary school enrollments increased significantly in the past few years, high costs continue to limit access to education. 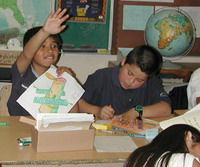 High costs continue to limit access to education in France

The report by the U.N. Education, Scientific and Cultural Organization, or UNESCO, said more children are registering for school, with enrollments in sub-Saharan Africa up 36 percent between 1999 and 2005. Enrollments grew by 22 percent in south and west Asia during the same period, the report said.

But the annual "Education for All Global Monitoring Report" found that cost continues to limit access to primary education.

Despite widespread legislation aimed at guaranteeing that public primary schools be free of charge, most students have to pay some sort of fees, the report said. In some cases, the charges "represent up to one-third of household income," the report said.

The report said poor education quality, which leads to students dropping out, was also a major stumbling block.

"Good national policies and higher domestic spending supported by external aid are clearly making a difference to the lives of millions of children," UNESCO's Nicholas Burnett, who directed the study, was quoted as saying in a statement Thursday. But, he added, "much more remains to be done."

The Education for All goals, adopted by 164 countries in 2000, pledge to make free primary education available to all children, and to work toward eliminating adult illiteracy and ending gender disparities in education.