Study says lung scans may find cancer earlier in smokers, and save lives

A controversial new study offers the strongest evidence yet that screening smokers for lung cancer with computerized chest scans can save lives, much as mammograms do for women with breast cancer. 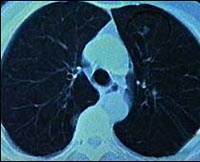 Study says lung scans may find cancer earlier in smokers, and save lives

Doctors have long had doubts that early detection of tumors could improve survival, and also feared that screening would lead to too many false alarms and unnecessary biopsies. Scans are not currently recommended, but many smokers have been paying for them on their own for their peace of mind.

The new study strongly suggests there is a survival benefit. But it does not prove the point, because it lacked a comparison group, many scientists say.

In the study, people whose early lung tumors were detected by CT scans and promptly removed had an estimated 10-year survival rate of 92 percent much better than the roughly 70 percent who typically survive, and far better than the dismal 5 percent who make it that long after the disease has spread beyond the lungs.

"It gives us greater confidence that screening may really offer advantages in saving lives from lung cancer," said Dr. Robert Smith, director of screening at the American Cancer Society, which was among more than two dozen groups that funded the study.

Even though the study lacked a comparison group, he said, "it's highly unlikely that this completely invalidates the observation of a favorable benefit from early diagnosis."

Lung cancer is the world's top cancer killer. About 174,470 Americans and 1 million people worldwide will be diagnosed with it this year. The vast majority will die, largely because the disease is found too late for treatment to do much good. Only 16 percent of cases in the United States are detected in Stage 1, when tumors are still confined to the lung.

Studies in the 1970s found that screening smokers with regular X-rays did not improve lung cancer survival, and such efforts were largely abandoned until the 1990s, when CT scans were developed.

These sophisticated X-rays produce images of the lungs from many angles and can reveal pea-size growths long before they produce symptoms. Interest in the scans rose in 1999, when Dr. Claudia Henschke of New York-Presbyterian Hospital/Weill Cornell Medical Center published a landmark study showing that they found far more tumors than conventional X-rays did.

Her new study, reported in Thursday's New England Journal of Medicine, extends these results to a larger group of people and reports on survival. Dozens of researchers around the world screened 31,567 people at high risk of lung cancer because they were current or former smokers or had been exposed to a lot of secondhand smoke.

Participants were initially screened between 1993 and 2005, and the vast majority came back for repeated screenings about a year later. Thirteen percent of those who were initially screened and 5 percent who had repeated screenings had suspicious spots that required further testing. Biopsies were performed on 535 patients; 484 were diagnosed with lung cancer, including 412 in the early stage. Most had surgery or chemotherapy, and eight were untreated, reports AP.

Researchers then calculated survival probability using a common statistical tool. The estimated 10-year survival rate, regardless of when the cancer was diagnosed or the type of treatment, was 80 percent.

That increased to 88 percent if the cancer was detected in an early stage, and to 92 percent if such patients had surgery within a month of diagnosis. The eight untreated patients all died within five years of diagnosis.

"When you find it when it's small, you can essentially cure most of them," Henschke said.