Frequent alcohol consumption by teenage girls may increase the chances that they will develop non-cancerous breast disease in their 20s and possibly breast cancer later in life. 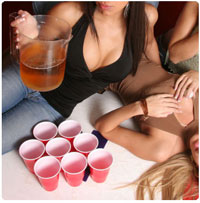 Research published online April 12 in the journal Pediatrics found that girls who drank the most alcohol during their teen years — daily or nearly every day — were five times more likely to develop benign breast disease as young adults than were their peers who never drank or drank less than once a week, according reports in USA Today.

Fibroadenoma, a non-cancerous tumor is most common among women aged 30 and below. BBD (benign breast cancer) boosts up the risk of breast cancer.

In this regard Berky stated "I suspect there may be some small additional BBD risk for even small amounts of alcohol consumed during adolescence," World News says.