A rare total solar eclipse will pass just west of Russia's third-largest city Friday, but crowds of tourists in Novosibirsk to witness the event may find their view of the event obscured by clouds and rain. 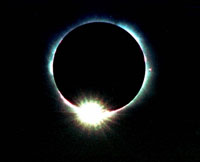 The eclipse - the moon passing in front of the sun - will begin in Arctic Canada around 0945 GMT, sweep across Greenland, pass through western Siberia, Mongolia and end in central China more than an hour and a half later.

Officials in Novosibirsk, Siberia's cultural and scientific capital, have set up 16 viewing sites, including special equipment for safely looking at the sun, for visitors who have come to the city for the astronomical event.

More than 5,000 foreign tourists were expected to show up in the city of 1.5 million for the event, said Olesya Varnavido, manager of the Olympia Reisen-Sibir travel agency.

If skies are clear, witnesses in the Russian city will see the sun vanish for two minutes and 20 seconds at 5:45 p.m. local time (1045 GMT.)

But the weather may not cooperate. Intermittent showers were forecast for the region late Friday afternoon.

"Meteorologists promise rain, and that would be very disappointing," said Tatiana Klyukina, a spokeswoman for the Novosibirsk mayor.

The forecast for northwestern China, meanwhile, called for sunny skies.

People have been recording solar eclipses for perhaps 4,000 years, and they typically inspire a combination of dread, fascination and awe - especially for those standing the path of the total eclipse, where the sun vanishes, the stars come out in daytime and temperatures briefly drop.

Eclipses have long intrigued astronomers, in part because they allow direct observation of the Sun's corona. One eclipse was used to confirm Einstein's theory of general relativity.

In recent decades they also have become popular events for tourists, inspiring a subculture of what are called "eclipse chasers."

Video of the eclipse will be carried live on a number of Web sites, including one in Novosibirsk: http://novosibirskguide.com/eclipse-2008/live-broadcasting/.

The U.S. space agency NASA will carry a live broadcast of the event from the Xinjiang Uygur Autonomous Region in northwestern China: http://sunearthday.gsfc.nasa.gov/2008eclipse/.

According to NASA, the next total eclipse is expected July 22, 2009, starting in India and continuing across Nepal, Bangladesh, Bhutan, Myanmar and China and into the Pacific Ocean.