Robotic rovers have patrolled deep space and the deepest seas, but scientists are still struggling to create drones that can overcome the multiple challenges of exploring Antarctica. 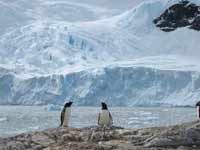 Georgia Tech researchers think the SnoMote - a small robot designed like a snowmobile - will be able to deal with the nasty weather and with slippery terrain that constantly cracks and shifts.

They envision dozens of SnoMotes roving Antarctica's vast expanses to add to data already collected by satellites and a handful of weather stations and sensors.

Ayanna Howard, an associate professor at Georgia Tech in Atlanta, has worked for two years under a NASA grant to perfect the 2-foot(61-centimeter)-long robots.

Her initial designs with spider-like legs proved too cumbersome to navigate snowbanks. So she and her colleagues leaned on others' designs, outfitting a snowmobile designed for kids with sensors, gauges and cameras and then programming it.

She developed a program that lets the SnoMotes negotiate with each other and "bid" on which site to investigate, allowing them to decide for themselves how to dole out their assignments.

The next challenge, though, was to come up with navigation for the rovers. Other probes tend to use distinguishing characteristics like rocks to chart their paths. But such features can be hard to come by in vast icy expanses.

On a field trip to a Colorado glacier, Howard's team discovered they could use microscopic fissures in the ice and snowbanks to guide their way.

Simulations so far have proved her team's formula effective, but plenty of challenges await when the robot is put to the test on the glaciers of Alaska.

With Penn State University researcher Derrick Lampkin, Howard has designed a shell that weighs 60 to 70 pounds (27 to 32 kilograms), can withstand harsh winters and eventually could include heaters to keep computers and wiring running in the cold.

Lampkin said his goal is to develop a "scale-adaptable, autonomous, mobile climate-monitoring network."

The researchers hope the robots will ultimately cost around $10,000 (EUR 6,387), relatively cheap for governments, researchers and others seeking to document changing conditions in the world's most remote places.

The more the better: Howard said in order for scientists to say with certainty how climate change is affecting the ice, they need plenty of accurate data points to create climate models.

She envisions a field of 40 to 50 of the SnoMotes wandering icy plains, a small army gathering data to shed light on global warming and other quandaries without breaking the bank.

"The whole concept is: How do you do this in the most affordable way?" she said.