A terrorist attack similar to the 2004 commuter train bombings in Madrid would be even more catastrophic in Los Angeles or Washington, D.C., because the injured would overwhelm strained emergency services, experts told a congressional hearing Monday. 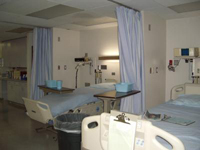 In case of bombing in the city each hospital would have to take over 250 patients in a short period of time.

The House Committee on Oversight and Government Reform examined conditions at 34 hospitals in seven cities on an arbitrarily chosen date and time -- March 25 at 4:30 p.m. -- to gauge how they could have handled such an influx of patients. The survey focused on hospitals with level 1 trauma centers, which handle the most serious injuries.

None of the hospitals surveyed in New York City, Chicago, Houston, Denver and Minneapolis had enough ER beds, intensive-care beds and regular beds to treat the number of patients that arrived at Madrid hospitals. But Los Angeles and Washington, D.C., had the most acute shortages.

The emergency rooms at three of the five Los Angeles County hospitals surveyed were on diversion that afternoon, meaning that they were turning away ambulances because there was no place to put new patients. In the other two hospitals combined, just six ER beds were available.

Two of the five hospitals had no intensive care beds available. On average, each had fewer than 30 regular beds free.