Brazil's military will help fight an outbreak of dengue fever in Rio de Janeiro, the defense ministry said at the weekend, after the disease killed 49 people and made more than 30,000 ill this year. 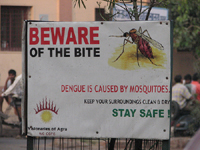 Public hospitals in the northern and western districts of the city were overwhelmed by the number of patients seeking treatment at the weekend. Many complained about long delays.

The defense ministry said Army, Air Force and Navy commanders would propose an action plan to Defense Minister Nelson Jobim as early as Monday on how to combat the disease in the famous beach and port city.

Jobim said on Friday the armed forces may set up field hospitals in the city.

Dengue fever and dengue hemorrhagic fever (DHF) are acute febrile diseases, found in the tropics and Africa, with a geographical spread similar to malaria. One major difference, however, is that malaria is often eradicated in major cities, whereas dengue is often found in urban areas of developed tropical nations, including Singapore, Taiwan, Indonesia, and Brazil. Caused by one of four closely related virus serotypes of the genus Flavivirus, family Flaviviridae, each serotype is sufficiently different that there is no cross-protection and epidemics caused by multiple serotypes (hyperendemicity) can occur.

Dengue is transmitted to humans by the Aedes aegypti mosquito, which feeds during the day. There is no vaccine or drug to treat it.

During the first months of 2007, over 16,000 cases have been reported in Paraguay and in the end of the year, more than 100.000, of which around 300 or 400 have been detected as DHF cases. Ten deaths have also been reported, including a high ranking member of the Ministry of Health.

The disease has propagated to Argentina by people who recently arrived from Paraguay. In the Brazilian state of Mato Grosso do Sul, which borders on Paraguay, the number of cases in March 2007 is estimated to be more than 45,000. Epidemics in the states of Ceará, Pará, São Paulo, and Rio de Janeiro have taken the Brazilian national tally of cases to over 70,000, with upwards of 20 deaths. Larvae have also been found in Parana state. The proportion of cases registered as DHF is reported to be higher than in previous years.

An outbreak of Dengue in the first seven months of 2007 in Brasil reported more than 438,000 cases of dengue fever, with 98 deaths.