Genzyme was down $3.59, or 5 percent, to $68.48. The annual cost of Genzyme's Gaucher disease drug, Cerezyme, at more than $300,000, has spurred a debate over the most effective dosage that will also reduce the medicine's expense. Genzyme shares are down 8 percent for the year. 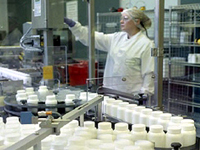 Genzyme Corporation is a biotechnology company based in Cambridge, Massachusetts. Genzyme is the world’s third biggest biotechnology company employing over 9,000 people around the world. At present, the company has approximately 80 locations in 40 countries. It includes 17 manufacturing facilities and 9 genetic testing laboratories. The company’s products are available in nearly 90 countries.

In 2006, Genzyme generated $3.2 billion in revenues with more than 25 products in the world’s markets. The company is also involved in philanthropic acts, donating $83 million in global product donations and $11 million in cash contributions in 2006.

In 2006 and 2007 Genzyme was named one of Fortune Magazine’s “100 Best Companies to Work for." Additionally in 2007, Genzyme was awarded the National Medal of Technology, the highest level of honor awarded by the President of the United States to America’s leading innovators.

Rite Aid began in 1962 as a single store opened in Scranton, Pennsylvania called Thrif D Discount Center. After several years of growth, Rite Aid adopted its current name and debuted as a public company in 1968. Rite Aid is headquartered in Camp Hill, a suburb of Harrisburg, Pennsylvania.