Studying Mississippi fossils researches discovered that small lemur-like primates wandered across a tropical land bridge from Siberia to Alaska during a period of global warming about 55 million years ago. 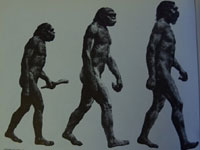 The baseball-sized animals, which ate bugs and jumped from tree to tree to avoid predators, came to U.S. costal lands long before their larger descendants showed up in Wyoming and Europe, scientistss reported yesterday in the Proceedings of the National Academy of Sciences.

The record of the globe-trotting primates helps scientists build a model of how vegetation and animal patterns changed during an age of rapid climate change, said study author Chris Beard, a curator at the Carnegie Museum of Natural History in Pittsburgh . Scientists look to the era for clues about what present-day changes may occur as the Earth's temperatures rise, he said.

At the time of the migration, the world's ice caps melted and cross-continental bridges appeared as land and water shifted across the planet's surface. As global temperatures rose, the animals followed a growing line of lush vegetation stretching from their ancestral home in Southeast Asia .

The Bering Straight land bridge must have been warm, humid and thick with trees to support the tropical creatures' migration. The primitive species, called Teilhardina primates, then thrived in the tropical warmth of North American coasts and moved into the cooler, drier U.S. interior as the climate there also warmed.

Falling sea levels eventually allowed the animals to “skimmy across'' from Greenland to Scotland and then on to Belgium and France , Beard said. Each major step of the migration took 10,000 to 30,000 years, a “snap of the fingers'' compared with the historic spread of many species.

About 20 million years later, temperatures cooled again, wiping out the primates in North America and Europe .

Beard said he sorted through fossils in Mississippi from 1990 through 2000 until he had a sample large enough to be confident about his hypothesis of the migrating primates.